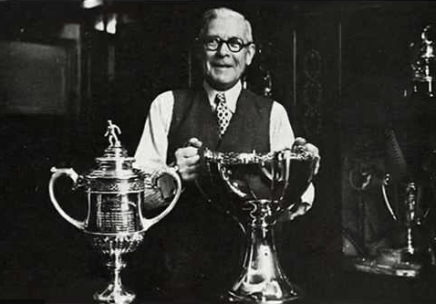 William (Bill) Struth (16 June 1875 – 21 September 1956) was the second manager of Rangers Football Club, leading the club for 34 years between 1920 and 1954, as well as being the holder of a number of other positions, including director. Struth is one of the most successful managers in Scottish and British football history.

how to build a site for free

He has won 30 major trophies in his Rangers career. Struth was born in Leith, Edinburgh, the eldest child of William Struth senior, a stonemason, and Isabella Cunningham. Struth grew up in Edinburgh and Milnathort (his father's birthplace) in Kinross-shire. He worked as a stonemason, but he also competed as a professional runner until he was in his 30s. In the early 1900s he began helping to train the players at his local football club, Heart of Midlothian FC, and in 1908 he moved to Glasgow to become the trainer at Clyde FC.

Struth moved to Rangers in 1914 in order to take up the position of assistant manager. At the age of 45, in 1920, he took over as manager after his predecessor William Wilton was drowned in a boating accident off Gourock.

Bill Struth went on to win the league title 18 times as manager, winning 14 titles in 19 years before the Second World War. This included winning five titles in a row between 1927 and 1931. Struth's tenure as manager spanned the club's first league and cup double in 1928, when Rangers lifted the Scottish Cup and ended a 25-year 'hoodoo', and its first treble in 1949, Struth becoming the first Scottish manager to achieve this honour.If wartime and local competitions (7 wartime league championships, 19 Glasgow Cups, 17 Glasgow Merchant Charity Cups and other wartime cups) are included, Struth won a total of 73 trophies during his career, making him the most decorated manager in British football history.

Struth was renowned as a disciplinarian, insisting that the team wore a collar and tie when turning up for training. Βowler hats were obligatory for Rangers players.

In 1947, Struth became a Rangers director and was then appointed vice-chairman after retiring in 1954. In 1952 he had part of a leg amputated as a result of gangrene. He died on 21 September 1956, aged 81, at his home in Dumbreck and is buried in Craigton Cemetery, overlooking Ibrox Park. His wife, Catherine Forbes, predeceased him in 1941. The grave lies in the south-west section on a terrace on its north side.In 2005, Rangers' chairman Sir David Murray unveiled a bronze bust of Bill Struth, located in the Main Stand at Ibrox, now known as the "Bill Struth Main Stand" in honour of his contribution to Rangers Football Club.

In 2016 a further memorial was placed at his grave listing his club achievements. 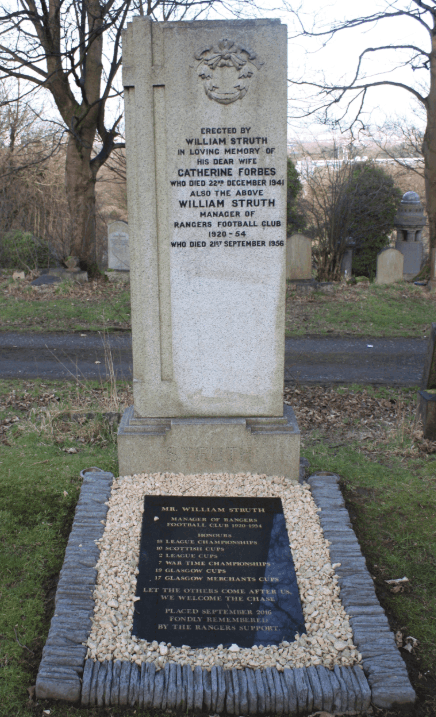 When being presented with the portrait that now hangs in the Ibrox trophy room, Bill Struth said:

I have been lucky — lucky in those who were around me from the boardroom to the dressing-room. In time of stress, their unstinted support, unbroken devotion to our club and calmness in adversity eased the task of making Rangers FC the premier club in this country.

To be a Ranger is to sense the sacred trust of upholding all that such a name means in this shrine of football. They must be true in their conception of what the Ibrox tradition seeks from them. No true Ranger has ever failed in the tradition set him."

Our very success, gained you will agree by skill, will draw more people than ever to see it. And that will benefit many more clubs than Rangers. Let the others come after us. We welcome the chase. It is healthy for us. We will never hide from it. Never fear, inevitably we shall have our years of failure, and when they arrive, we must reveal tolerance and sanity. No matter the days of anxiety that come our way, we shall emerge stronger because of the trials to be overcome. That has been the philosophy of the Rangers since the days of the gallant pioneers.